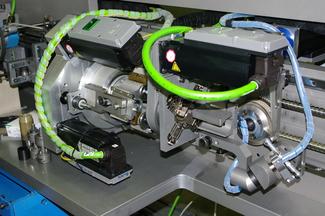 If you Google ‘Motion Design’, the hits are all related to the graphics industry.

This series of blogs discusses why motion design for machines is different.

How critical?  Well if you want your machines to perform at their best, without jams, with little maintenance, with the greatest efficiency and throughput…then motion design for your machines is very critical.

Let’s take a look at a Machine Part and see how critical the motion design for it might be.

Let’s imagine your Machine Part is actually your head!  Why? Because most people know where their head is!  They have also experienced its movement.

OK.  Now you are sat, blind-folded, in a chair.  Your head, and you, might be at your desk typing a blog, in a car traveling at speed or in a rocket on the way to Mars.  Three different velocities.  However, because you and your head cannot sense velocity, you will not know which of the three you are experiencing. Your blind-folded head does not know how fast it is traveling.

Your head is a little more concerned about its acceleration.  Well its position, too, to be truthful. After all, you do want your head to remain on your shoulders.

Back to acceleration.  Let’s imagine you are being interviewed for an astronaut’s job.  You are now still blind-folded, but in chair in a centrifuge.  You are spinning at constant velocity.  Of course your head is being flung outwards.

Hence, with constant acceleration, the component will deflect to a consistent position.

However, packaging machines have parts that are moved back and forth, as well as remain stationary for 'dwell' periods.  Hence, machine Parts must be subject to varying acceleration.

Let’s look at Jerk.  Jerk is the rate of change of acceleration.

How does the Mechanical Component respond to Jerk?

When a mechanical component is subject to ‘varying acceleration’ – jerk - then it will simply deflect to a continuously match the varying acceleration so that the internal and external forces are in equilibrium – won’t it?  Yes! And No!

If the acceleration is varied at a 'high rate' – or has a high value of jerk – the deflection of the component will 'lag' the deflection that would be observed for the' low rate'.  Once the acceleration reaches Level 2 the component will then 'catch up' (unwind) and, assuming there is little internal damping, 'overshoot'.  The overshoot will be observed in all motion derivatives: position, velocity, acceleration, jerk, jounce, snap, crackle, pop...since they are all related with simple calculus.

So what is rate of acceleration or jerk that is too high for the machine component, or for that matter, for your neck?

For the machine component, it depends on its inertia and stiffness. Low stiffness with high inertia will not respond well, while high stiffness and low inertia will respond well. There is a parameter called Period Ratio.  That will be discussed in another blog. Of course, the fastest possible rate of change of acceleration is 'infinite' - that is, infinite jerk.  This is a step-change in applied acceleration.

Nothing can respond to a motion that intends to move a machine component with an acceleration that changes from Level 1 to Level 2 in zero time. All mechanical systems that are told to respond to a step-change in acceleration will lag in response to the new force level imposed on it and then overshoot.

Surely, no one would try to apply a instantaneous change in acceleration to a mechanical system if they knew it would lag and then overshoot the desired value of acceleration, velocity and position? That would be exciting vibrations in the system needlessly. Well, you would be surprised. But more of that in a later Blog post.

Try this experiment.  Take a steel ruler - one that can easily bend, but not too much.  Clamp it, or hold it to the side of a table so it overhangs the table.  Suspend a mass above the end of the ruler from 'zero' height - that is, the mass is just touching the ruler.  Release the mass.  You will observe the ruler deflects and vibrates.  It will deflect up to twice the deflection of the 'steady-state' deflection.  The ruler was not subject to impact - that is it was not hit - because the mass was initially touching the ruler.  The ruler was only subject to a step change in force - equivalent to a step-change in acceleration.

So, that is a bit about ‘Jerk’ – the important motion design parameter that massively influences vibration of machine components. It's a good job MotionDesigner, our built-in motion design application, allows you to edit the Jerk values to any value you need.

But what makes a good overall motion?  That is the subject of the another blog post.